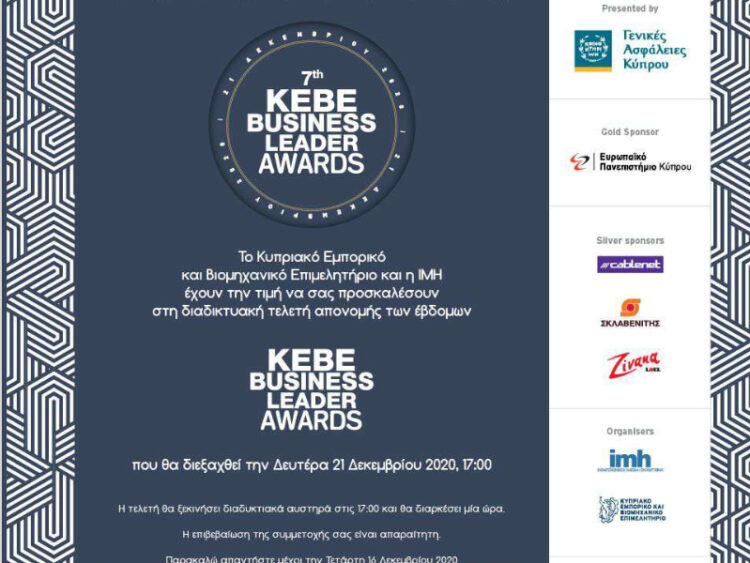 The 7th CCCI Business Leader Awards were held digitally and in compliance with all Covid-19 protocols, on Monday, December 21.

For the 7th consecutive year, Cypriot businesses and entrepreneurs were awarded, acknowledging their achievements and their leadership’s excellence. The awards, presented by General Insurance of Cyprus, were organised by the Cyprus Chamber of Commerce & Industry and IMH. The European University of Cyprus acted as the event’s Gold sponsor while Cablenet and Sklavenitis Cyprus were the Silver sponsors.

A total of nine awards were awarded this year, where the Honorary Award for the overall contribution to entrepreneurship was received by the chairman of Char. Pilakoutas Group, Kodros Pilakoutas.

The CCCI Business Leader Awards honour leadership excellence in Cyprus, as well as individuals who have contributed to the growth of not only their own firms but that of entrepreneurship in general through the implementation of best practices and innovative strategies. They are individuals who operate with integrity and ethos, have gained the respect of their own employees as well as that of their competitors and the broader business community, and who work on the basis of the key principles that characterize a successful leader: dynamism, innovation, foresight and knowledge.

By RSM Cyprus RSM Cyprus together with our Global Network serves clients spanning all revenue categories, from start-ups to multi-billion-dollar entities....